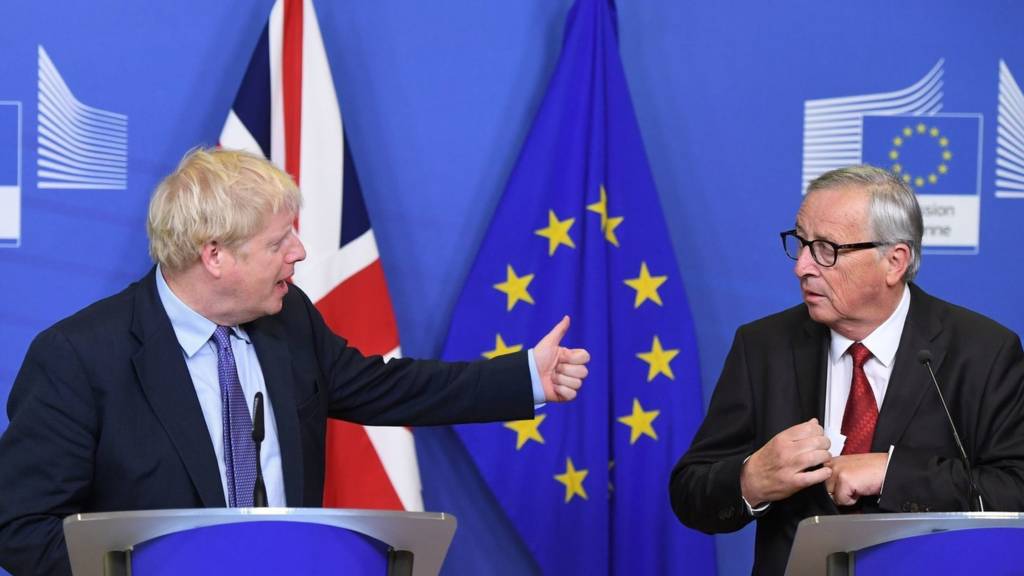 As Brexit runs havoc around the country, having already swallowed two Prime Ministers and looking hungry for a third, we injected game theory into this labyrinth in hopes that it might shed some light into this perplexing puzzle playing out in front of us.

The Nash Equilibrium, named after Nobel Laureate John Nash who spoke in WES2005, is a concept where the optimal outcome of a game is one where no other player has the incentive to deviate from it. Since the optimal strategy is chosen after considering an opponent’s choice, economists used it to explain why some players would rationally choose the worst-case scenario as their optimal outcome. To enjoy the article, a basic understanding of the Nash Equilibrium is recommended.

Andy Mayer of the Institute of Economic Affairs, a prominent UK think-tank, modelled the Brexit game and found that the optimal outcome is for Britain to choose whatever deal proposed by the EU. To illustrate, we could simplify the EU’s position to be either Lenient or Punitive, and the UK’s position to be either Deal or No Deal. The payoffs allocated in this model are subjective and the specific numbers are irrelevant. What matters most is their relative sizes. We have taken the parties’ public stance as a proxy for the payoff it would derive from an outcome.

In Figure 1, the EU would receive a higher payoff of 4 for being Punitive as it acts as a deterrent against other countries considering leaving, compared to 2 for being Lenient. For the UK, we assume that most MPs prefer the prospect of a deal, hence No Deal gives a utility of -5, and a Lenient deal gives a utility of -2 and a Punitive one -4 respectively. Under these assumptions, the Nash Equilibrium calls for the UK to accept a Punitive deal from the EU.

Do we see this conclusion in real life? Just a few weeks ago, the answer would be no. Although the game says that MPs should accept any deal that comes their way, in reality, they rejected Theresa May’s proposal three times in some of the most devastating government defeats in recent times. However, just days ago the House of Commons approved the second reading of Boris Johnson’s deal, and it seems the model might be heading in the right direction.

What’s puzzling, and perhaps more interesting, is that many believe Johnson’s deal is far worse than his predecessor, yet it passed through the first step in Commons while May’s supposedly better deal failed. The economic concept of transitivity preference, which binds preference ordering in a logical manner, breaks down in this situation. A big reason for this is due to timing. The basic model we looked at here does not take into factor the time element imposed by the deadline, which increases the severity of the consequences as it reaches the end (October 31st). This urgency could explain why MPs might choose to vote for a deal as Halloween looms, even if they previously rejected a better deal.

A big player to consider is the Democratic Unionist Party, whose 10 MPs hold incredible sway over a house that is mostly split between Tory and Labour lines. The DUP rode to power by being resolute, staunchly resisting the Irish Backstop which would split up the UK and Northern Ireland.

The grid above shows their preferences. The Irish backstop will never be accepted by the DUP, hence they will receive an infinite negative utility if a deal includes it. The DUP will block this at all cost, and in the event of a No Deal, the backstop is then voided which yields a utility of -5. The best position for the DUP is to have a deal with no Irish backstop (-2 utility), but that is only possible by having both the UK government and the EU agreeing to its demands, which is highly unlikely. From Figure 2, we then conclude the DUP’s best strategy is to opt for a No Deal.

Confirming the DUP’s worst nightmare, Johnson alternative to May’s Irish backstop is more severe, with the possibility of a border in the Irish sea between the UK and Northern Ireland. In this deal, Northern Ireland would be treated separately to the rest of the UK, even to the unimaginable extent that Northern Irish businesses might have to fill in customs forms to ship their goods to their cousins in England, Scotland and Wales. If the model in Figure 2 valid, we would then expect the DUP to opt for No Deal.  True to reality, the DUP opted for No Deal. 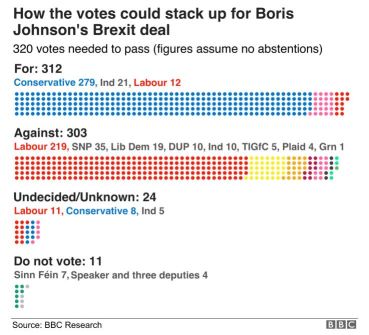 In an analysis by the BBC’s political research unit, it predicts that 312 MPs will vote for the deal and 303 will vote against, leaving 24 MPs who are on the fringes. The magic number for any victory is 320, hence Johnson will only need to convince 8 of them to vote for him. With Figure 1 predicting the MPs should support any deal before them, our Game Theory model predicts a deal will pass through the Commons.

That being said, we unfortunately have to miss out on many different aspects of reality, such as the preferences of the Eurosceptics (some 100 to 150 MPs) who do not have a unitary view of Brexit. Some MPs would prefer a Norway style deal, others a Canada type deal. But as an overview of the issue, Game Theory serves as a flashlight to navigate this dark labyrinth before us, this uncertain maze of Brexit.