Donald Trump has triumphantly claimed his tariffs are the primary cause for China’s slowest GDP growth in three decades. Unconvinced, we asked the Center for China and Globalisation for their views.

China’s softening economy came at the back of a tumultuous trade war with Washington, where its exports suffered heavily due to tariffs from the US. In turn, this affected the GDP numbers for China which recorded a year-on-year growth of 6.2 percent, its lowest since records began. Impulsive as ever, President Trump immediately tweeted that China’s ailing GDP is a result of the effectiveness of the US’s tariffs.

But many are unconvinced the dip in China’s economic numbers can be largely credited to President Trump’s trade war. For that, the Warwick Economics Summit reached out to the Center for China and Globalisation (CCG), a leading Chinese non-governmental think-tank based in Beijing, for their thoughts on the factors that led to China’s faltering performance.

Li Qing, a senior analyst with the CCG, believes that the impact of the trade war on China’s GDP is marginal. “I don’t see too many fears surrounding the trade friction between China and the US,” Li Qing said. “China’s fast development is the result of reforming and opening up its market after 1978. This happened not only because China cooperated with the US, but also with the rest of the world.”

While Chinese exports took a hit from President Trump’s tariffs, the claim that tariffs have a “major effect” on GDP figures is exaggerated. According to numbers from Statista, China’s share of exports as a fraction of GDP has been steadily on the decline, from 31.7 percent in 2008 to 18.2 percent in 2018.

In contrast, many small European Countries export over 40 percent of their production, and an economy is considered relatively closed if exports only constitute 15 percent or less of its GDP. While the United States is still China’s main export partner, importing 19.2 percent of Chinese export volume in 2018, trade has long ceased to be the main actor in China’s growth story. 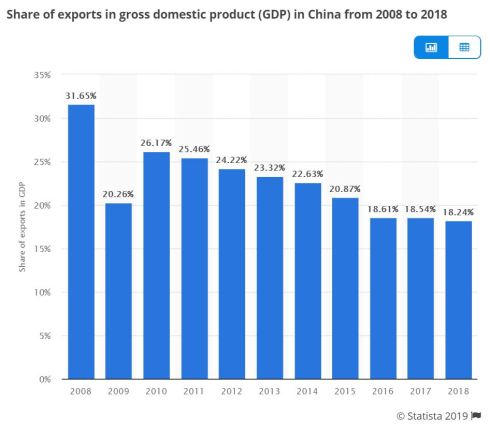 In fact, the main factor seems to be China’s domestic economy. Li Qing forecasted that the Chinese economy will continue to experience growth in the short to medium term, pointing to strong tailwinds in consumer demand as drivers of the growth. “The domestic market will strongly support the Chinese economy,” Li Qing said.

China reported robust domestic consumption in June, with retail sales up 9.8 percent marking a sharp increase from the 8.6 percent recorded in May. The service sector continued to remain stable for the first half of the year, growing 7 percent on the same period last year.

But some economists are wary against this strong headline growth, concerned that it masked several underlying areas of concern. A strong driver of retail sales was auto sales, which has been artificially propped up by rebates from the government. Many other aspects of retail consumption in China, such as real estate, has been sluggish.

“Whether [auto sales] is a one-off or front-loading, we’ll have to wait until next month to see if it holds up,” said JPMorgan’s global market strategist Marcella Chow in an interview with the Financial Times.

The stagnant real-estate sector proves to be a major headache for the Chinese government that is bogged down by incredibly high levels of public debt. Total debt in China now stands at over $40tn, or close to 310 percent of GDP according to the Institute of International Finance.

High levels of debt mean that Beijing can no longer stimulate growth by injecting cheap credit to spur asset price inflation. In an already inflated property market, higher housing prices will only push housing options further from a growing middle class. Yet when property prices ease, households rein in spending because they feel poorer as their wealth dips.

This precarious balancing act leaves China in a tricky situation. It seeks to contain economic bust by enticing investors with tax cuts and rebates, and when the economy booms, it removes these benefits. However, it is difficult to inject the right dose at the right time, with problems such as time lag, slow government response and misinterpretation of economic conditions leaving much room for costly policy errors.

James Kynge, who heads China Confidential Compass, a research department of the Financial Times, thinks that the only escape for China comes from boosting productivity. “Although US trade tariffs have little power to injure China, the prospect of a full-blown economic rivalry with the US that restricts Chinese companies’ access to US tech looms as a potent threat,” he said in an opinion piece to the Financial Times.

Li Qing concurs, saying that there should be openness between the two superpowers to achieve a three-zero policy in international cooperation: zero tariffs, zero barriers and zero subsidies. President Trump claiming that tariffs are the key to China’s faltering growth is not right, nor is he entirely wrong either. While the threat of a trade war holds vast policy implications for China, the more pressing economic concern seems to be from within.