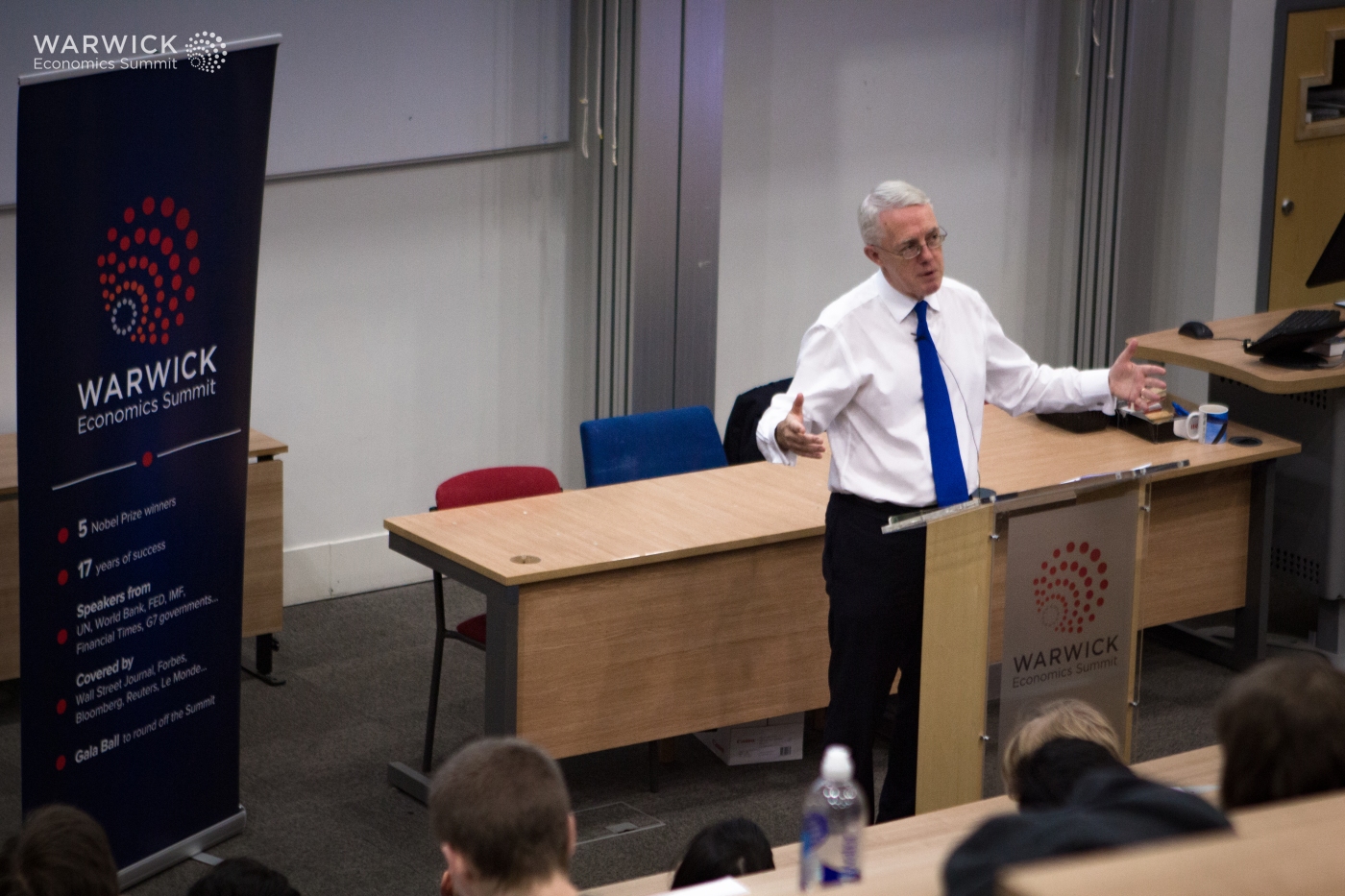 The first WES Presents of the 2017/18 academic year featured Sir John Vickers, former Chief Economist at the Bank of England (1998-2000) and currently professor of Economics at the University of Oxford. The 1-hour talk focused on the topic of banking reform with specific reference to the work of the Independent Committee on Banking (ICB), which Sir Vickers chaired.

To contextualize the committee tasks, Sir Vickers began with a detailed analysis of the distortions in the banking sector that led to the dramatic events of 2007-08, focusing especially on the extreme levels of leverage to which most banks were exposed. Leverage, expressed in terms of equity multiplier, measures the extent to which a bank has financed its assets with equity, a strategy that is much more costly than debt issuance. Consequently, profit-hungry banks tend to build up high leverages to magnify returns, even though this makes them more  vulnerable to shocks. In the 50 years leading to the financial  crisis equity ratios more than doubled, reaching levels of 60x equity in the eve of the crackdown. Most economists, said Vickers, culpably failed to notice the exponential growth in the leverage of banks, probably due to the scarce appeal of the subject in the academic world.

“The recent banking crisis was not a perfect storm, but very severe weather exposing a horribly fragile structure”, claimed Vickers referring to the banks’ unpreparedness and lack of shock-absorbing assets.

The former BoE Chief Economist also stressed how the interlinkage of financial institutions and the absence of any internal separation between retail and the investment divisions helped to spread the shock, eventually obliging governments to bail out national banks at the expense of taxpayers.

In analysing the long-lasting consequences of such events on national economies, Vickers admitted that the recovery has been weak and couldn’t hide his specific concern about the stagnating trend of UK productivity, which hasn’t increased since 2007. Under those exceptional circumstances Vickers said he was asked to chair the ICB. Created  in 2010 by the then-Chancellor George Osborne to develop a series of proposals aimed at  stabilizing the UK banking sector, the Committee included prominent individuals from the field of  economics and immediately agreed on the necessity of raising the capital requirements for banks and reforming the internal structure of UK banks. In doing so, Vickers recalled, the real challenge was to balance the need to avoid a repeat of “too big to fail” situations with a weak domestic economy and the pressure of global competition. He also admitted that some of the Committee’s proposals were criticized by some fellow economists for being too lax, a sign of the persisting distance between  the views of academics and the real-world concerns of regulators. Eventually the Committee opted for a reasonable reduction of the equity multiplier cap from 33x, the level established by Basel III (the main international agreement in this field), to 25x.

As far as the structure of banks is concerned, the Committee advocated a strategic ring-fencing of UK banks.  This structural change requires that “retail banking is conducted in an entity separate from investment banking, with self-standing equity and other loss-absorbency, and appropriately independent governance”. According to the WES speaker, this procedure would safeguard national depositors and improve banks’ ability to overcome external shocks, while preserving their global competitiveness. 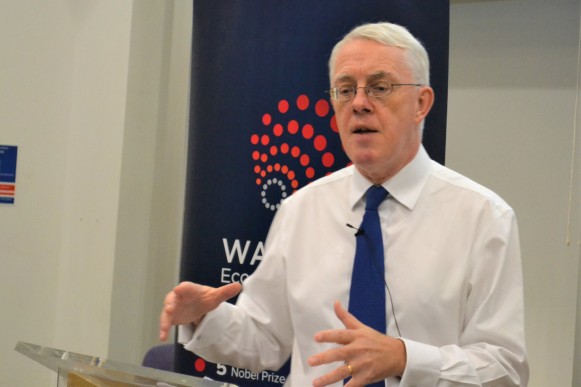 After explaining  the rationale behind the choices of his Committee, Sir Vickers assessed their implementation 6 years after the publication of the ICB Report in 2011. While he declared himself quite satisfied with the government’s structural reforms on the banking sector,  in particular with the implementation of ring-fencing, introduced through the 2013 Financial Services Act, he could not hide his disappointment with the recent decisions of the Bank of England to keep leverage requirements at 33x and not to increase overall capital requirements for banks. He explicitly attacked current BoE Governor Mark Carney’s declaration that “the capital requirements of our largest banks are now ten times higher than before the crisis” (24 June 2016), a statement which is only partially supported by facts and which contradicts previous support for the ICB’s proposals, Vickers said. As explained in a recent policy paper, the BoE Financial Policy Committee fears, in fact, that additional requirements on banks’ capital could have adverse effects on “the capacity of the financial sector to contribute to the growth of the UK economy” and possibly on its global competitiveness.

Sir Vickers’ answer to the leading question of the event – “Has banking reform gone far enough?” – was therefore unequivocally negative, revealing the former Chief Economist’s concerns about the robustness of the banking sector in the UK and the Bank of England’s recent policies.

“There was something for everyone. From the role of a banking system in an economy, to an in-depth technical discussion about its regulation, all levels of economists had something to gain from this talk.”- Robert, Maths, 4th year

“It was great to have an alternative view on the actions of the Bank of England from a former officer of that institution” – Gustaf, EPAIS, 1st year

“Vickers provided fascinating insight into the process of banking reform after the Financial Crisis and whether reforms have gone far enough. It was particularly interesting to hear his criticisms of the Bank of England’s role in the reforms and I feel I left the talk far more informed on the topic than before.” – Dan, Economics, 1st year